Since Episode 31 of the Nine Circles Audio Thing is for October’s Album of the Month, it’s fitting we’re chatting about Exhumed and their latest deathgrind masterpiece Horror. I mean, what better month to wax on blood, guts, death metal, and all those sorts of dark things! Plus, we had an almost full house which offered tons of viewpoints and tons of great discussion about this album and so much more. 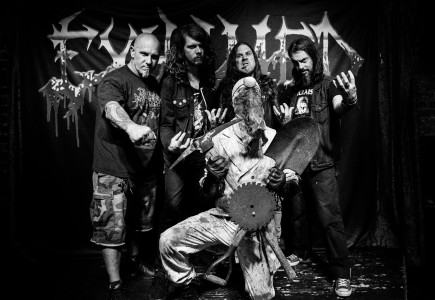 I had the pick this month and was joined by Vince, Charles, Jon, Heracat, Buke, Anton, and Schuler, who some of you may remember from his 9C column Yelphammer or you might know him from his current radio show Deathdrive 90.5. With the house almost full, opinions varied but overall it’s safe to say this is a FUN album but the best thing is we had a couple newcomers to Exhumed who will no doubt enjoy playing catch up. For a band that’s been around since the early 90s, obviously the history went deep as did the comparisons to and recommendations for such a deep discography.

All that, and of course lots of talk surrounding several other albums that piqued everyone’s interest in October, and some old arguments resurfaced which got interesting. At a little over an hour there’s a load of talk and great music mentioned, so jump on in and satiate your desire for podcast companionship. Support your favorite music!

In the meantime, listen to Exhumed and we’ll see you next month!

Horror is available now via Relapse Records.  For more information on Exhumed, visit their Facebook page.

2 thoughts on “The Nine Circles Audio Thing: Exhumed was October 2019’s Album of the Month!”