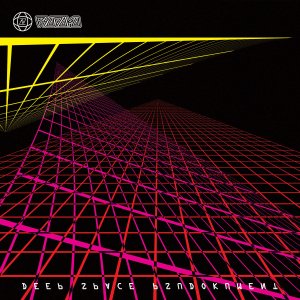 Oh, the fine art of avant-garde! All too often launching headfirst into cartoon territory or utterly incoherent and lacking catchy hooks. All those sudden shifts in style and tempo detached from the overall flow and harmony; the price to pay when striving to defy the listener’s expectations and violate the borders of musical comfort zone and keep one constantly guessing where the wrecking ball will land next. Leave it to the avant-grind spaceball unit Psudoku to snicker at such lethal snares with the adroit madness captured within its latest release Deep Space Psudokument, delivered from the future for our enjoyment and deciphering.

On Deep Space Psudokument — one of my most anticipated releases in 2016 — Psudoku has further honed its mastery of bouncy playfulness, producing pure glee without ridicule or parody. Everything remains tightly in control with commendable coherence, never regressing into pretentiousness, befuddling stream of consciousness nor rudderless cartoonish buffoonery. Deep Space Psudokument is busier, noisier and more spastic than Psudoku’s previous albums, replacing the free jazz and epic song lengths of the immaculate Planetarisk Psudoku with elements of surf rock, doom and electronic classical, while redeploying some of the immediacy of its debut Space Grind.

Changes are evident also in the vocal department, where the echoing guttural burps and hiccups that provided rhythmic punctuation on the previous releases have made way for unintelligible shrieks and screams. Although the music remains largely instrumental, the frantic bursts of vocal insanity provide jet fuel for the mass of interdimensional joy racing across the electromagnetic spectrum. Guitars possess a lean surf rock influenced tone and are often running scales and weird star-stop chord progressions to produce a giddy sensation of cosmic waves crashing against the amygdala. The shimmering guitar lines often glide above the churning rampage delivered by distorted bass, unhinged drumming, ecstatic synths and a suite of otherworldly effects that stomp, pound and pulverize. The percussive punch is massive throughout the album, akin to multiple drum kits strapped to a cavalcade of splashy effects ran through interdimensional filters, all falling down a staircase designed by M. C. Escher in a perfectly controlled manner. There’s beauty in the dynamics and interplay too; on my personal favorite “spaceBURIEALiz_9” the guitar remains silent during the wonderfully elastic yet lashing first half of the song, until entering the fray at the halfway mark to incinerate everything in vicinity and lead into a monstrous build-up that launches the song into ionosphere.

Psudoku skillfully avoids grind’s characteristic pitfall of sameness and listening fatigue by throwing in frisky variation, such as the one-two punch of “KRISEzettinx.pcm” and “EDB-doom” which could function as the doom metal soundtrack for an 8-bit-era haunted house adventure game, replete with gloomy strings and ghastly chirruping effects mocking expectations for an easy escape. Some songs, such as “ZpRNVphNtz” could be the theme songs for a bizarre quiz show featured in an especially deranged episode of Rick and Morty.

Music like this is something that should not exist but, thanks to the existence of parallel universes and the invention of time travel, does, as if someone remotely human ingested a heroic dose of deliriants, and was taught to play instruments by a group of fractal elves from the fifth dimension who entered our reality to replicate the death rattle of their imploded universe. On Deep Space Psudokument, Psudoku reaches a creative pinnacle where it has mastered the art of musical alchemy and now operates metal as a malleable substance it kneads, twists and reorganizes at the molecular level with godlike grace, presenting to earthbound mortals the shape of grind to come but already here.

Deep Space Psudokument is available now in different formats on Bandcamp, Selfmadegod Records and Behind the Mountain Records. For more information on Psudoku, visit their official website.