Old Man Wizard is a progressive heavy rock band based out of Southern California and have been around since 2011. This week will see the release of their 7″ single “Innocent Hands” which will include a B side. Today is the last day you can catch them on the road for a bit so if you’re in San Diego, CA make a stop at Soda Bar and pick up a copy of for yourself but hang around to hear the band’s amazing chops. What you’ll find on this single is a cross between Mastodon and Baroness with a heavy dose of uplifting ambience and honestly uplifting is something we could all use right now. Just ahead of this single’s release we got a chance to ask Francis Roberts (guitar, vocals) our set of Profile questions so read on to see what he had to say. 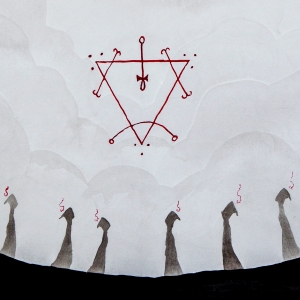 When I was 15 or 16, my dad and I were at a party for one of his friends, and the only people my age were his friend’s daughter and a couple of her friends. They were penned up in a room with a guitar and showed me how to play a song and read guitar tabs. I thought it was really easy (I guess I was over-confident, haha!) and I knew my mom had a guitar in the closet somewhere, so I dug it out as soon as I got home and spent the next few years learning pieces of every song I could think of until some kids at school started asking me to play in bands with them. I think the first CDs I bought to learn songs from were Led Zeppelin II and a greatest hits album from Dio.

I’m probably too ambitious to ever achieve the level of success I’m comfortable with, although I have told friends that I think the highest honor a musician can receive is writing the theme song for a James Bond film, so I guess doing that is probably my unrealistic aspiration.

I feel like I’m debasing myself every time I do an interview, send an email, make a call, or do anything that isn’t writing and recording music. I guess I used to play in a pirate-themed band, so a lot of people might say that takes the cake for this question. I think we had really cool music, but people definitely cared more about the fact that we were dressed as pirates than they did about the music.

Best thing to happen to metal lately is probably the increased willingness to try blending “metal” with other types of music. Even if the result isn’t good, it’s encouraging people to try to be creative, which I think is really important.

The worst thing that ever happened to metal was the idea that you have to look, sound, and act a certain way to be into metal (or just to “be” metal). That shit is toxic and spawns raging assholes. When that happens, things sorta become a parody of themselves. Music doesn’t have to be metal to be heavy, and metal doesn’t have to be heavy to be cool (also, what even is “heavy”? I’ve played in bands where everyone’s definition was different). Your hair doesn’t have to be long, you don’t need a denim vest with patches all over it, and you don’t even need guitars or a drum kit in your band to be metal. Just go be cool to people and listen to music that you like, and dress like you’d want you as a character to look in a video game or action movie, or just dress like everyone else does so people don’t stare at you. Who cares.

It seems that now everyone has a passion for some cause and that those people are very open about displaying their passions. This is probably a very, very good (and progressive) thing socially. What are some of the most important issues (social/political/humorous/etc.) for you and how do you insert those issues into your music? (This question is especially appropriate for you since your music is quite an outlet for your physical and emotional pains).

I think it’s pretty important for people to be cool to each other. Playing music brings people together, even if it’s just a small amount of people, and I think getting out there and touring and doing music is enough to make people feel good about themselves, which leads you to meet people who don’t look like you, don’t act like you, and don’t live like you, but they still wanna be your friend. We need more of that.

My brother started buying Metallica CDs when we were in middle school. I didn’t care about music at all and just listened to what he did, but when you’re used to hearing your brother’s Korn, Offspring, and Limp Bizkit CDs and suddenly he puts Kill ‘Em All on, you kinda just go “Holy shit, what is this stuff? That’s cool.” We ended up getting into more metal and got our parents to let us go to Ozzfest in 2004 (our first concert without supervision!) where I saw Judas Priest and Black Sabbath, among others. That was really eye opening and life-changing.

My family is cool and supportive. My friends seem to like hanging out with my parents more than they like hanging out with me. My brother thinks my music is cool, and I can tell he pays attention because every time I send him a demo of a new project that I think is really cool, his new favorite song of mine ends up being on it. He’s great about not becoming attached to an old song because he’s comfortable with it, and he helps me figure out ways to improve my writing all the time.

(Note: I never really stopped thinking the Offspring was cool and still like a lot of their music today)

Listen to music from genres that you don’t think you like, and approach it with some level of expectation and good intent. There’s a lot of shit out there that you probably didn’t think you’d like that ends up being really cool and fun to listen to. Try to enjoy music, not a lifestyle associated with your favorite genre.

We just try to have fun and play cool music. I write all the music so I guess the others think it’s cool enough to play. I understand that most of the stuff I write is pretty niche and I don’t expect to control any sizable territories on the planet, but maybe one of these days I’ll have an opportunity to “sell out” and write great pop music. As far as work and hobbies, Andre and I both teach music, Kris writes computer programs (and makes computer games with his brother). I get into doing stuff like art and writing but rarely complete non-music projects. It’s fun having them around though. I don’t really know what Andre does, I think he just makes curry and plays video games.

This changes all the time. I tend to buy a couple of records at a time and listen to them a bunch before putting them away. The ones sitting on my record player right now are: The Pentangle – Basket of Light, Uriah Heep – The Magician’s Birthday, Queen – A Night At The Opera and R.I.P. – In The Wind.

I listen to a lot of music on YouTube also, so judging from my account history, I’ve been listening to Tommy Emmanuel, The Beach Boys, Hammers of Misfortune, Mayhem, Rainbow, Orne, and the soundtracks of Final Fantasy VII and Conan the Barbarian (the 1982 one with Arnold and the Basil Poledouris score, duh. Maybe it was a long time ago but I distinctly remember listening to Random Access Memories by Daft Punk on repeat for a few days sometime in the last year.

Constants that I listen to all the time and never get sick of: Hammers of Misfortune – The Locust Years, King Diamond – Abigail, Them, Uriah Heep – Demons and Wizards, Rainbow – Rising, Long Live Rock n’ Roll, S/T and Jethro Tull – Aqualung, Thick As A Brick.

Many thanks to Francis for his time!

Innocent Hands will be available August 25 on the band’s Bandcamp page. For more information on Old Man Wizard visit their Facebook page.

One thought on “Profile: Francis Roberts of Old Man Wizard”